To correspond with Native American Heritage Month in the United States, our November Build Challenge was all about Indigenous Stories. We invited students around the world to celebrate the rich and diverse cultures, traditions, and histories of the First Peoples in their regions by researching their stories and building them in Minecraft: Education Edition. It was interesting to see different traditions represented in so many different ways. Take a look at this month’s student creations!

The traditional culture of India was very well-represented in this month’s challenge. Namya Joshi decided to tell a story from the Ramayana and created an entire city to house her narrative! Her walled complex contained space for wildlife, homes for the people, and an enormous palace. She used non-player characters as storytellers that would reveal parts of the Rama’s adventures as the player moved throughout the world.

Simar Mohanty also shared a story of ancient heroes and their exploits by representing the Punjab tale of Chirri and Kaa, a small bird and their not-so-helpful neighbor, a crow. She set her story in a giant jungle and created enormous models to represent the main characters at different stages of the narrative. Her world operated like an immense virtual comic book!

Chinmay Jagga started his story in a fantastically large library and shared information about the Gondi people, including their ancient astronomical knowledge, aspects of their religion, and their place in modern Indian society.

Piyush Bhange chose the story of Ganesha. He created colossal statues of Ganesha and an elephant, and provided a magnificent view of his build. If you haven’t heard the story of why Ganesha has the head of an elephant, Piyush’s Build Challenge is an excellent way to learn!

Here’s one that will sound familiar to many people around the world. Punit Bhange shared his own take on the classic fable about the tortoise and the rabbit. His build includes statues of both characters as they’re about to set off on a race and the immense racecourse where they’ll compete. It’s interesting to see how some stories emerge in many different regions in the world.

Our final entry in India comes from Avina, who represented one of the many tales about Akbar and Birbal. In this story, Akbar bets Birbal that he can’t find someone who will spend the night in an ice-cold lake, and the story unfolds from there. Avina used the Book and Quill to record the text of the story and engaged Immersive Reader to narrate the story to her audience.

In the United States, a group of Liz Bradley’s students decided to depict a variety of stories from Indigenous cultures in their region. Liam told the story of a troublesome bear that couldn’t be caught, while Shaun shared The Fox and the Stars. Three different students depicted The Star That Does Not Move, a story about how the misadventures of a mountain goat led to the creation of the North Star. Each version, including work from Sailor, Mitchell, and Ryland, re-created the tale just a little differently, displaying the power of a good story to be told and retold. 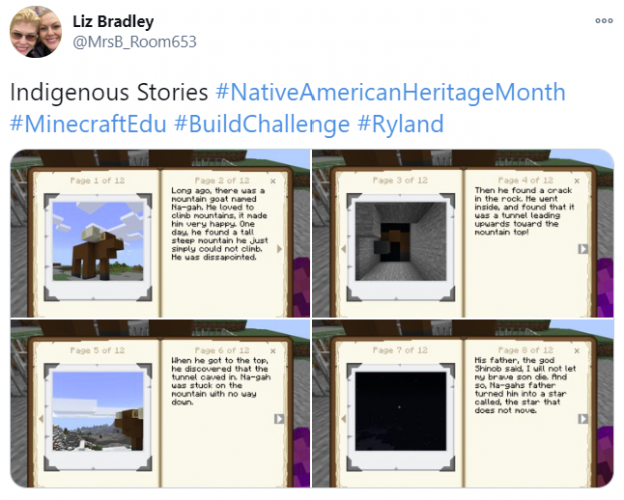 Finally, we head to Malaysia, where Goh Kok Ming’s students depicted emblematic animals from the cultures of China and Malaysia, including lions, elephants, and tigers. Many cultures attach significance to creatures in the natural world, and it’s fascinating to see both the students’ sculptures and descriptions of what each creature represents.

We appreciated seeing each and every entry for the November Build Challenge. Our team certainly learned a lot from reviewing these builds. If you’re looking for more challenges to engage your students, you can find all of our past activities here. If you’re new to Minecraft: Education Edition, begin your journey at education.minecraft.net/get-started.

The post Students Around the World Shared Indigenous Stories for the November Build Challenge appeared first on Minecraft: Education Edition.

Today’s math classrooms are incredibly diverse, students come from many backgrounds and teachers differentiate their instruction for various skill levels and needs. At Microsoft Education, we are here to support students and teachers in their journey.

For International Women’s Day and Women’s History month, we want to help you inspire girls to change the world, whether they aspire to be engineers, artists, programmers, designers, world leaders, or anything that ignites their passion! To celebrate, we’re releasing new lessons for our Good Trouble: Lessons in Social Justice world about two activists who’ve had an enormous impact on women’s education and their place in society.

Sat Paul Mittal School is a Microsoft Showcase School in Ludhiana in Punjab, India. When a chance mention of Minecraft on a Skype call piqued their students’ interest, they took a chance on game-based learning. Head of IT Monica Joshi tells the story of how, in just two short years, Minecraft: Education Edition became a mainstay for creative, cross-curricular learning.